The Story of the Groundhog and His Shadow 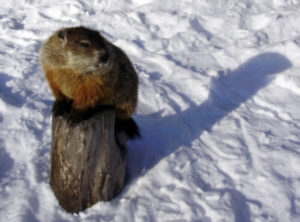 Many of you may have tuned in on February 2nd, Groundhog Day, to see if we have another six weeks of winter or an early spring. The meteorologist who makes this weather prediction? A large marmot named Punxsutawney Phil. Better known as a groundhog or woodchuck this rodent is a true hibernator, which means he is in a deep sleep throughout the winter. When Phil emerges on February 2nd, he either sees his shadow which means six more weeks of winter or does not see his shadow which means an early spring. This tradition is a strange one that has many stories surrounding its origin. Nowadays, thousands of people celebrate by gathering to see what Phil will predict. Not all groundhogs wake up on this day however; most will wait until March to take a peek at the weather situation and to scope out a potential mate.

I imagine explaining this tradition to my young son, and think perhaps I’ll make up a story as those work best with ones so small, so here goes.

Once upon a time, in a faraway land, there lived people who were in tune with nature and lived off the land. The last winter they experienced was a harsh one that they were much unprepared for. They tried to think of a way to tell how long the winter would last this year. They realized that hibernators, like groundhogs, would never leave their cozy burrows unless spring was fast approaching. So, in order for them to be properly prepared, they would wake one of these fine fellows on February 2nd and ask them what to expect of the weather in the coming months. They chose this day because it fell midway between the winter solstice and the spring equinox. What better day could there be?

Being a kind people, they approached a groundhog one fall afternoon and asked him if he would help. After hearing of their plan, the groundhog agreed, but only if they gathered food for him so he could get nice and fat before his long winter nap. To these terms the people agreed and the deal was made.

And so February 2nd approached and the people realized they had not asked the groundhog how to wake him up. One knows it is very difficult to wake an animal in hibernation. They thought long and hard. Perhaps they could ring a bell? But that didn’t work. Then they tried dancing and singing as loud as they could over the groundhog’s burrow. Still nothing! The sun was dipping alarmingly low in the sky; there was not much time left. A small child spoke up, suggesting that perhaps if they cooked a delicious meal, then the aroma would surely wake a hungry marmot? A meal was speedily prepared with some of the groundhog’s favorite foods such as soybeans, corn and carrots. The aroma wafted down into the entrance of his burrow. Just then the groundhog was up and out of the burrow munching on the delectable meal, finishing it in record time. He looked over at the sun shining on what was quite a cold day and then looked behind himself. There he saw his shadow outlining his short and stout body. He looked sadly at the people gathered and shared his prediction: six more weeks of winter. With that he went back into his burrow to sleep away the cold months ahead.

The people rejoiced at their luck. The idea had worked! Now they knew that had to make their food stores last a few months longer and to keep plenty of wood available for their fires. From that day on, every February 2nd was celebrated with a visit to a groundhog burrow for their weather predictions. The people also made sure to always bring the groundhog a big meal in return for his services. It’s really the only way to wake one from hibernation! 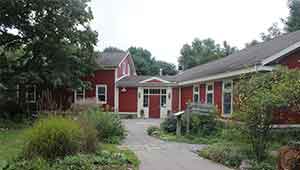 Hours:
The Interpretive Center is open to the public Monday – Friday from 9am-4pm and Saturdays from 10am-4pm. The office is staffed Monday – Friday 9am-4pm at (315) 673-1350. Please call if you require assistance.

The trails are open dawn to dusk every day with parking in upper or lower lots. No admission or parking fees. No dogs please. Thank you for your cooperation.