The Music and Beauty of Katydids 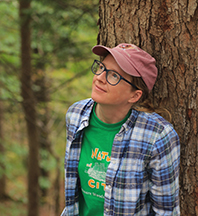 On warm August nights, I always look forward to katydid choruses. As the sun goes down outside my window, True Katydids gradually burst into song. It starts with a few of their classic “kat-y-did” calls, and eventually the treetops are echoing with their raspy chorus. The True Katydid has one of the most recognizable katydid songs, with two or three rather loud syllables. “Kat-y-did, kat-y, kat-y-did.” These insects have one pair of rounded, leaf-like wings, but are unable to fly. They are rather mysterious because they spend most of their time very high in the treetops, so I’ve only seen this species a couple of times.

Katydids produce sound through a process called stridulation, in which they rub the edge of one wing against a comb-like structure. In a large chorus of True Katydids, males will synchronize singing in two groups, which alternate their calls.

In addition to the overwhelmingly loud chorus of True Katydids, I enjoy trying to pick up the sounds of other species. Lately, a few Oblong-winged Katydids have been clicking outside my window intermittently. Sometimes katydids are attracted to the porchlight, and I’ve let a couple of them outside after they bumbled through the entryway door. Their wings are a marvel of evolution, with colors and vein patterns that look just like summery green leaves.

Some species, such as the meadow katydids, are more diurnal. These often make sprinkler-like clicking sounds and can be found hopping around in open grassy fields. Many of them have extremely long antennae, which help them to detect predators.

I always find it especially calming to drift off to sleep with the windows open while listening to a chorus of insects or frogs and enjoying the fresh air. Have you been listening to katydids or other animal songsters on these warm summer nights? If you’re interested in learning more about summer insect songs, take a look at Lang Elliott’s very informative website, which includes audio recordings: http://songsofinsects.com/identification-basics