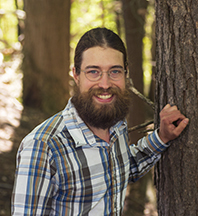 Many things are easier to see in winter: tracks across fresh snow, subtle forms of bark otherwise overshadowed by verdant leaves, bright birds that stand out against a drab background.

Unfortunately not everything we can find in winter is what we would like to find. Sitting against the green needles of our ancient hemlocks we found the creature that we were least hoping to see this year, Hemlock Woolly Adelgid.

This insect hitched a ride from East Asia on ornamental tree imports in the 1950s.Since then it has steadily moved northward leaving in its wake a forest of standing dead hemlocks. The steep slopes and coldwater streams that these beautiful trees sustained were left to erode and warm. From the Great Smoky Mountains to New England tens of millions of hemlocks have been infected and killed by this virulent invasive.

We’ve known that this insect is moving toward Baltimore Woods, and in an effort to make the best informed decisions on how to reduce its impacts volunteers and staff have searched for it multiple times. Unfortunately during our search last Wednesday our team discovered the insect in a number of our trees.

There is a silver lining to this story though. First, we found this infestation early. Most of the trees that had adelgid signs were lightly infected, and none showed signs of significant dieback. Second, we have built partnerships with groups like the New York State Hemlock Woolly Adelgid Initiative which allows us to better understand how this discovery impacts our hemlocks. Finally and most importantly, BWNC is committed to protecting our hemlocks (which include some of the largest in the county) allowing them to continue to shade trout streams, build unique habitats, and cast their deep shade for centuries to come.

Want to get involved with helping to monitor and protect hemlocks at Baltimore Woods? Email [email protected] to learn more.