A Winter Day at the Pond 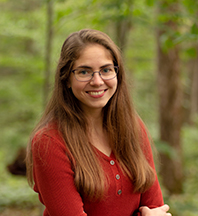 Phillip’s Pond is a favorite summer spot for many campers, hikers, and visitors at Baltimore Woods. However, in the winter, the pond transforms into a new world with its own fascinating experiences to offer. On a cold day last week, I took a walk to the pond to see what I could find.

While the summer pond is a cacophony of sound and activity, the pond in winter is nearly silent. Aside from my own footsteps, the only sounds were the calls of chickadees and titmice and the tapping of woodpeckers in the trees above. Beneath the frozen edge of the pond, leaves and sticks were held in suspended animation. The ice contained an incredible array of textures. Some patches were smooth as glass, while others rippled like waves or fractured into geometric shapes. At first glance, the winter pond exists in a state of stillness and silence.

However, a closer look revealed flickers of movement under the ice. Tadpoles wriggled along the sand while a giant water bug traversed the underside of the ice. Backswimmers, small aquatic insects, navigated slowly around their larger neighbors. Although the top of the pond was frozen, a layer of liquid water remained along the bottom. In this space, much of the pond life that we see in the summer continued its activity. But how do these creatures survive in a world so different from their summer habitat?

Winter pond life is a fascinating example of animals’ ability to adapt to changes in their environment. Beneath the ice, the oxygen that pond creatures rely on is in short supply. Underwater plants can photosynthesize and produce some oxygen when the ice is thin, offering a lifeline to animals that draw oxygen from the water. However, snow or thick ice can cut off this process. Many food sources diminish in the winter as well. In this climate of scarcity, animals must change to survive. Some pond creatures, like tadpoles and aquatic insects, slow down their activity in the winter to use fewer resources. Others, like turtles and salamanders, burrow into the mud and enter a state similar to hibernation called brumation. With these adaptations, pond life can continue throughout the winter.

Although the pond may appear very different in winter, it is still home to the creatures we see in warmer weather. Taking a winter walk by the pond can remind us that while life may change or slow down during these months, it never disappears completely. In many cases, it’s beneath our feet, below the surface of the ice or soil.